After the long and heady journey to Spain, beginning on a late night busculator to Dublin Aerodrome, Aer Lingus to Madrid, bus to Salamanca, then a tiring but busy time on Saturday, the Spanish Party awoke on Sunday fully refreshed and ready for tourism and linguistics headed to Madrid.
The Spanish Party the El Templo de Debod and marvelled at the Egypt- inspired building there. An impressive trip around the outside of the Palacio Real (Royal Palaces) followed and then the mighty classical cathedral.  The city tour concluded with the Plaza Nayor and the the busy and frenetic Sol (the very centre of the country and the city). The students were allowed off the lead for a time and the party reconvened in due moment to transfer to the extraordinary stadium that is Real Madrid Bernabeu. This place, in all its glory, had more to it than even poor Mr Sexton could imagine and thoroughly interesting and absorbing.
The Spanish Party then joined a party from the Czech Republic on the busculator back to Salamanca. 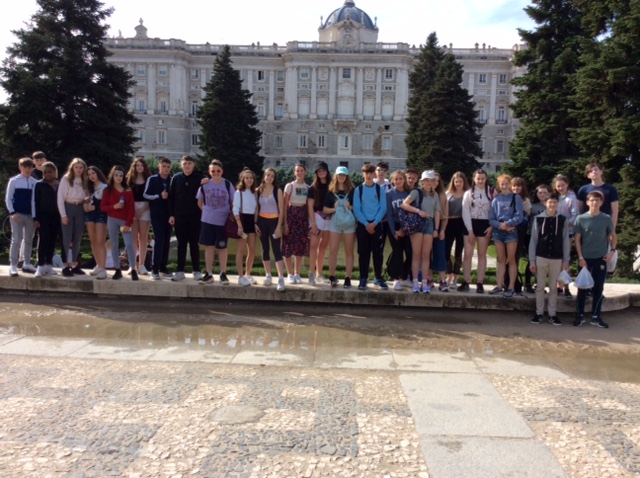