11 November 2018 marked the 100th anniversary of the cessation of hostilities after World War I. Midleton College’s relationship with the Great War was examined this year and a Centenary Roll of Honour of 13 past pupils was unveiled on 15th November 2018. The Panel records the following students who lost their lives in the Great War:

The Great War as it became known was meant to be over by Christmas but for these boys of Midleton College they like so many never made it back to their loved ones.  Some of our boys are buried in communal cemeteries; Corbie Communal Cemetery, Somme, France, (2nd Lieutenant James Stafford West) and Blangy-Tronville Communal Cemetery, Somme, France (Major Hubert Piers Beresford Poer (M.I.D).

While at Midleton College some like Wilson, Charles St. John Beatty, Levis, Beresford Poer were boarders. Tyner, West and Bryon Holmes had attended the local John the Baptist School and received their early education from ‘Mrs Packham before “we became college boys”. Penrose Fitzgerald and Webster were from the Grange, Midleton and Ballinacurra respectively. The College consisted of a big schoolroom with 2 adjoining classrooms. The big schoolroom had fires at either end and was equipped with rows of desks. There was evening prep from 7 to 9pm and the Headmaster came in at 9pm to read prayers. Students had to study for the Intermediate Examinations in various grades and for the Synod Examinations in Greek Testament. On Sundays, boys marched two abreast to Church, wearing hard collars and bowler hats with walks to Ballyedmond and Ballinacurra often occupying the Sunday afternoons.

Boys played rugby, cricket and hockey. At the turn of the twentieth century when a lot of the bigger boys left Midleton College, hockey was taken up as a winter game and it became very popular. Games were played against teams such as Cork Grammar School, Fermoy and Cork clubs such as Constitution, Bohemians, A Straggler Team which was composed of old Boys [past pupils], Rev. Tichborne’s Team, [Tichborne provided religious instruction to the boys between 7.30 and 8)] and Midleton Town. The College also played Regimental teams either mixed or composed of officers, Queenstown Garrison Artillery and Warships from the Harbour, Yorkshire Regiments, Leinster Regiment and the Rifle Brigade. Due to small student numbers ‘a combined team of Midleton College Past and Present [including the Headmaster Mr. Baker] was formed and entered for the Munster Senior Hockey League’. The school produced several excellent players such as William Bryon Holmes, who played for Blackrock Club and was capped twice for Ireland in 1909 against England and Wales.

One of the earliest casualties was 5848 Private William Bryon Holmes of the Rock Midleton who fought and died with the Irish Guards. Two Governors of the College, Mr. James Penrose Fitzgerald and John Bennett would lose sons. Penrose Fitzgerald lost Maurice who died on 26 July 1916 aged 23 and Herbert James Cooper who was a past student of the College died on 12 October 1916 aged 25. Jack Bennett, an only son died on 13 October 1915.  Students fought with the Royal Munster Fusiliers (Ronayne, Bennett, Wilson, Beatty and Clery), the Royal Dublin Fusiliers (Tyner), the Royal Irish Regiment (Nealon), the Royal Irish Rifles (Levis) and the Royal Navy (Eddie Webster). Five former students were killed at the Battle of the Somme/ Somme Offensive as it was known. They were: 2nd Lieutenant James Stafford West, 2nd Lieutenant Thomas Goodwin Tyner, 2nd Lieutenant Arthur Dominic Wilson, Lieutenant Charles St John Beatty and Lieutenant Herbert James Cooper Penrose Fitzgerald. As Robert Laurence Binyon reflects, in the poem, ‘For the Fallen’:

“They shall grow not old, as we that are left grow old,

Age shall not weary them nor the years condemn,

At the going down of the sun and in the morning

We will remember them” This is one of the oldest photographs of Midleton College and was taken in the late 1870s. The Headmaster, the Reverand Thomas Moore is in the middle of the front row. Mr Moore was Headmaster of the College from 1863 to 1882. He was subsequently appointed Rector of Midleton and Precentor of Cloyne Cathedral. We are indebted to Mr Joe Wilson of Cobh for this photograph. Mr Cornelius Maurice O'Connell was a Master in the College and great grandfather of Mr Wilson, is second from the left in the same row as Headmaster Moore. 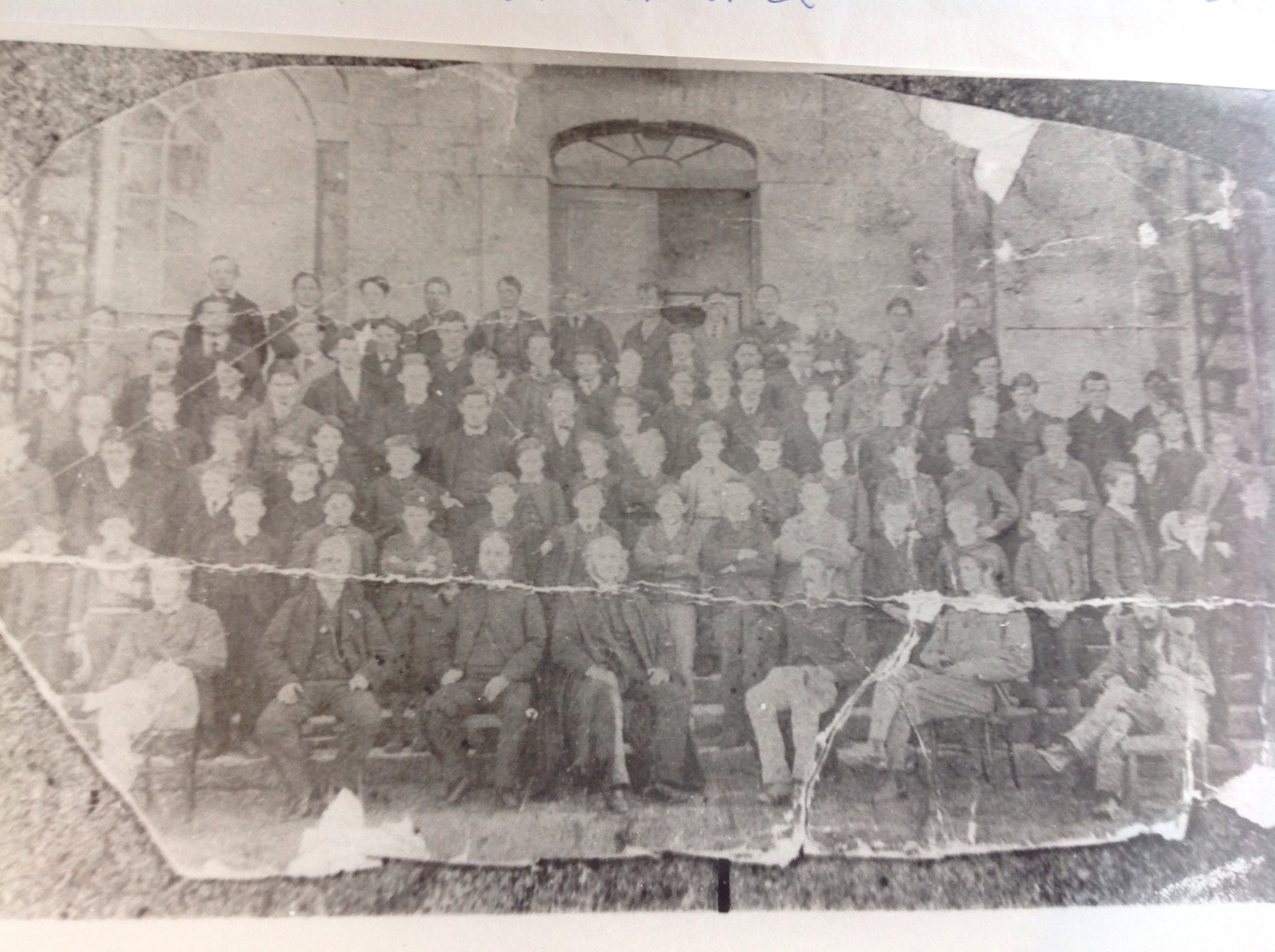